Israel’s Arab Swimwear Ban Is Another Excuse to Extend Segregation

Let’s face it: gender equity and women’s empowerment is quite an alien concept to some of our middle eastern societies, where some Muslim girls are dauntingly deprived of their common rights, among the most common and important one being education.
The Deputy Secretary-General Of the UN noted that “in almost all countries, women continue to be underrepresented in decision-making positions; their work continues to be undervalued; and violence against women and girls continues unabated worldwide.”
They are being put under tangling complexes of lower status and limited opportunities, relative to men, in the domains of education, employment, and proprietary rights.
On a casual basis, I witness men being given more value and highlights, especially in education. Mothers oh-so-proudly rant about the achievements of their sons, while sharply undervaluing the capabilities of their daughters.
Because of their conservative and traditional mindset, they refuse to let their daughters set foot past the house door, prohibiting them from, perhaps, attaining some confidence, wisdom and valuable and real-world experiences.

Because of their conservative and traditional mindset, they refuse to let their daughters set foot past the house door, prohibiting them from, perhaps, attaining some confidence, wisdom and valuable and real-world experiences.

A common question they pose when hearing about a girl’s accomplishments is, “What will she do from so much education? In the end, she will only be running her household and managing her family.” 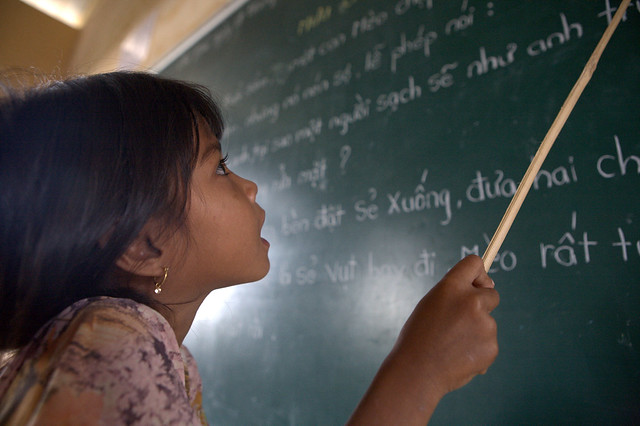 What? This kind of mental attitude distresses me! Luckily, I have very encouraging parents who fight the stereotypes of typical middle-eastern parents.
My parents continuously discuss my future aspirations and always intend to strengthen me as a girl. They perceive the crucial necessity of noteworthy schooling in a girl’s life. Forever will I be thankful for my fate.
But what about that of other Muslim girls, who are forcibly enrolled in the “University of Kitchen,” as the outstanding Orruba Almansouri accurately puts it.
I demand an answer for such treatment.
Why are girls automatically deemed inferior and not given equal opportunities? As a result, you weaken their status in society and ponder why they fail to find aplomb and a strong foothold in their future families. Tell me, which ayat in the Quran advocates for girls’ inferiorization?
By automatically robbing them of their critical right of education, you are promoting harm for the entire society! Why do you do this? Why do you let your conservative thinking overtake the welfare of the society as a whole?
Your undeveloped mindset is one of the leading causes for the lack of empowerment and development in our regions. Stop doing this! Stop letting your logic hold the rest of us back from revolutionizing ourselves and our cultures.

By automatically robbing them of their critical right of education, you are promoting harm for the entire society! Why do you do this?

The importance of education is highlighted in the Quran and in numerous hadiths of our beloved Prophet Muhammad (PBUH): “If anyone travels on a road in search of knowledge, Allah will cause him to travel on one of the roads of Paradise. The angels will lower their wings in their great pleasure with one who seeks knowledge, the inhabitants of the heavens and the Earth and the fish in the deep waters will ask forgiveness for the learned man.”
If our Prophet (PBUH) is a significant proponent for knowledge, then who are you to deny girls their schooling?
Strengthening of girls, via education, brings about remarkable and excellent changes. It betters the entire population through economic prosperity and advantages the many generations to come. Let us rise to out forefronts and shred stereotypes, so perhaps, we can evince to the world our courageous sides and effect multifarious benefits.

Strengthening of girls, via education, brings about remarkable and excellent changes.

Besides girls that are not suppressed under the conservatives, there are, indeed, countless examples of those who went beyond mental expectations and surprised and delighted others around them.

In no particular order, I listed some extraordinary Muslim women who made headlines in the recent years.

Al-Mansouri is an Emirati female fighter pilot who earned recognition for flying her F-16 to run the UAE’s air strikes against the radical group — Islamic State of Iraq and Syria (ISIS) — in Syria in September of 2014.
Her supervisor mentions her as someone who “put[s] forth a progressive sample of what Emirati women can do in different fields including defense and military.”

Mirzakhani is an Iranian-born Harvard-educated mathematician and professor at Stanford University in California who became the pioneering woman to achieve a very eminent global prize known as the Fields Medal, also noted as the Nobel Prize for Math.
See Also
#MuslimGirlLife

A Call to Action for South Asians: Finding a #CureforKenza

If given appropriate support, girls can reach unprecedented grounds and later become women of extraordinary excellence.

Jabarti made international headlines when The Saudi Gazette newspaper appointed her as the country’s first female editor-in-chief, an appointment that has been considered as an unforgettable move in the kingdom.

Al-Jabara was a mother of four who was entitled as the honorable “sheikha,” a title given to a leader who sacrificed her life fighting the militants in the western province of Salah al-Din.

If given appropriate support, girls can reach unprecedented grounds and later become women of extraordinary excellence. Now is the time to empower our girls!

Rethinking “Thanksgiving”: Why Tomorrow Is a “National Day of Mourning”

What’s in a Name?

Has COVID Forced a Return To Following the Sunnah When It Comes To Weddings?

How to Keep Your Envy & Faith in Check

Israel’s Arab Swimwear Ban Is Another Excuse to Extend Segregation