Muslim women are commonly misrepresented in the media. That’s due to the fact they have no saying on how they should be portrayed. For this reason, Muslim women are usually scrutinized with the wrong lenses.

These 7 female artists decided to take matters into their own hands in order to change this inaccurate vision, and present their own  reality on Muslim women through their art. 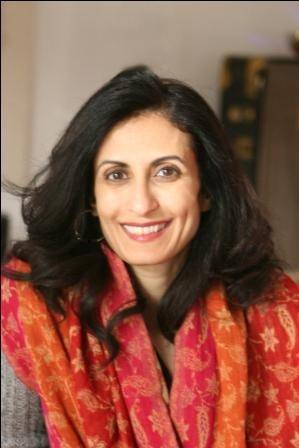 Boushra Almutawakel is a Yemeni photographer, whose work revolves on the portrayal of the Arab/Muslim woman as well as their clothing, particularly from an international point of view.

Witnessing the misrepresentation of Islam in the news after September 11, she shifted her focus on the western perception of Arabs and Muslims. She gained international recognition for “The Hijab” series, where she challenges the many stereotypes about the hijab and the women who wear it. She wanted to demonstrate the different aspects of the hijab through her photography, and “undemonize” it as a symbol of oppression.

In her “What If” series, she confronts social norms by dressing a man in a hijab. In a similar work, she does the opposite, by traditionally dressing a woman as a man. In her words, “men’s traditional clothing is very similar to women’s clothing – long, loose, modest and often with a head-covering. The focus in Western media is always on the way women are dressed so I wanted to challenge this idea.” 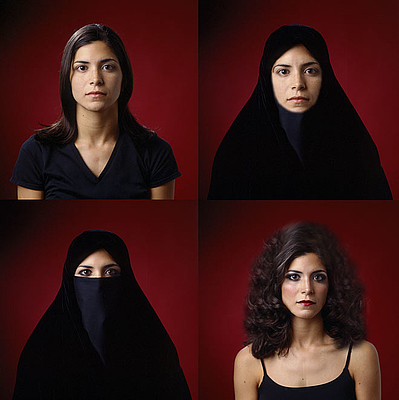 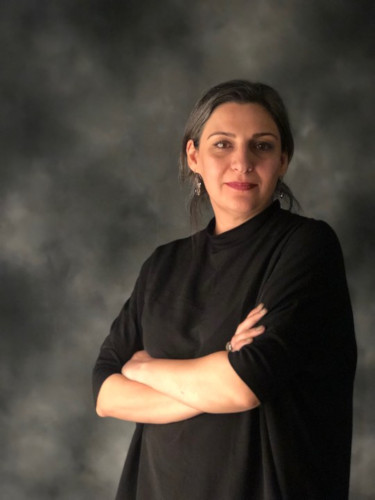 Shadi Ghadirian is an Iranian photographer. Her work reflects her (and other women) life as a Muslim woman living in Iran.  “My series are exactly like a mirror of my life,” said Shadi. “When I see me, I see the other women like me, my sisters, my friends, the women in this country”.

She gained worldwide recognition with her “Qajar” series, where she mixes contemporary elements with the traditional lives of women in Iran. The series consists of arranged portraits of women in a Qajar era setting, with the addition of  “forbidden objects” in Iran, such as boomboxes, censored books, beer cans, and a bicycle. The series portrays the paradoxical life of young Iranian women – how they live in public and how they live behind closed doors.

Shadi makes sure to demonstrate the confidence expressed by the girls in her pictures. According to the curator Rose Issa, who represents Shadi’s work,  the girls “are not shy, they are not those victimized young women that people think the Muslim world is. They decide for their lives. They take risks. They use the things that are forbidden. They are not embarrassed”. 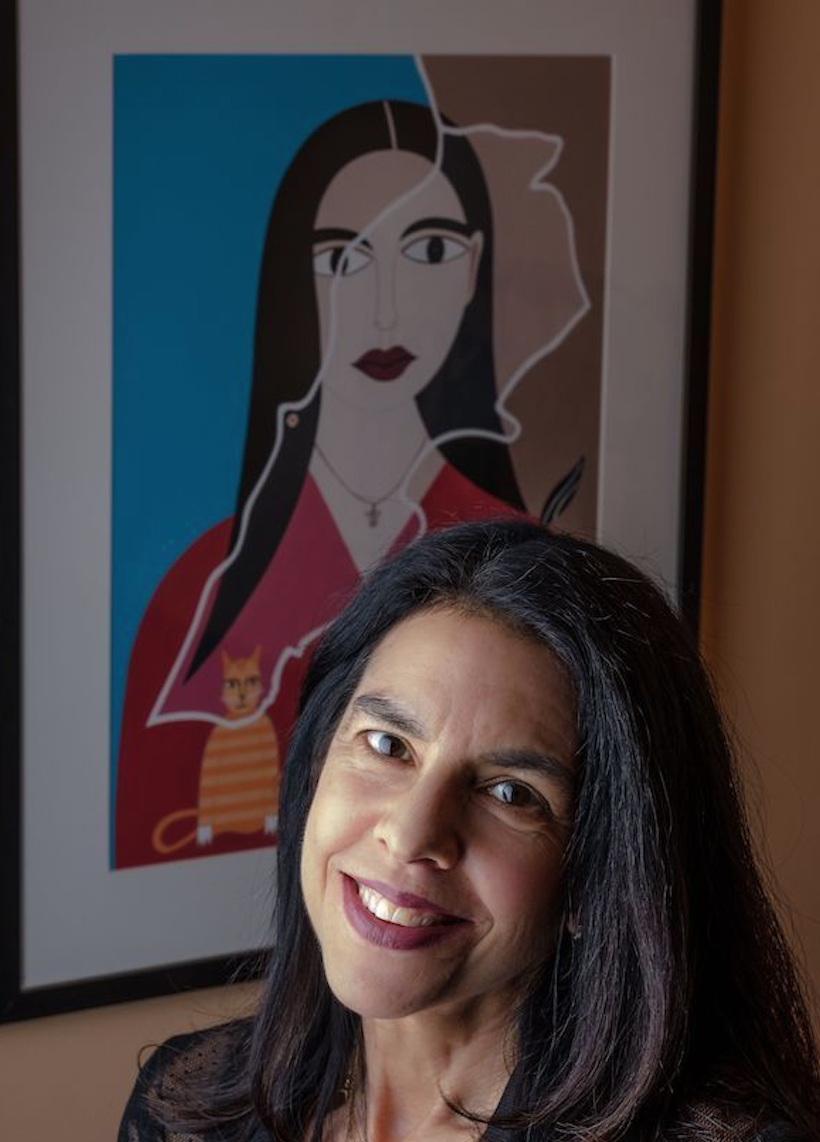 Helen Zughaib is a Lebanese born painter and multimedia artist. Her artwork was chosen by former President Barack Obama and former Secretary of State Hillary Clinton, as gifts to visiting Heads of States.

Although raised Catholic, she took a stance after the September 11 attacks, when she witnessed the abaya being presented as a symbol of oppression of Muslim women. She then started working on her “Changing Perceptions” series, where she juxtaposes the black abaya with elements from known Western artists such as Mondrian, Kahlo, and Picasso. The idea is to change the misunderstood image that the West has of the abaya, by mixing elements of both West and East.

Her works coincided with Barack Obama running for office. At the time he was often negatively label as Muslim and was the target of criticism for not wearing the American flag pin, implying his lack of patriotism. Zughaib addressed this issue by creating the “Abaya with a Flag Pin”, her way of saying that Arab Americans are just as patriotic as any other American citizen. 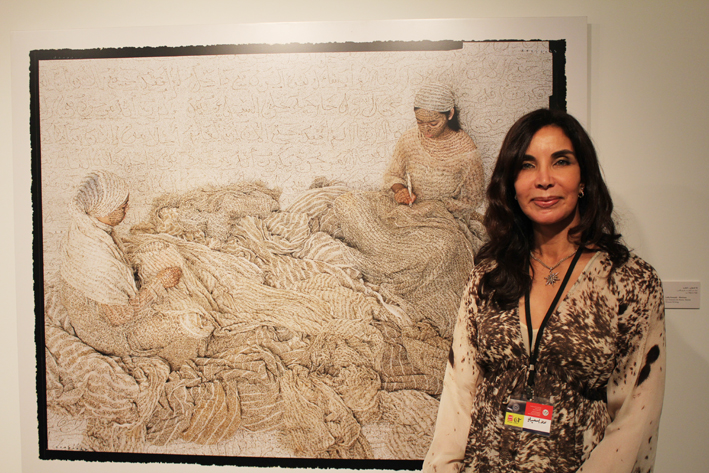 Lalla Essayadi is a Moroccan photographer and painter. She is known for the portrayal of Arab women covered in hand-painted Arabic calligraphy in henna. Through her work , she explores the Arabic female identity through a 19th century orientalist style, addressing the hardships imposed on the Arabic woman body.  In her own words,”In my art, I wish to present myself through multiple lenses — as artist, as Moroccan, as traditionalist, as Liberal, as Muslim.  In short, I invite viewers to resist stereotypes.”

She considers her work as autobiographical, as she explores her experiences growing up in Morocco and Saudi Arabia. She compares the perception of women living in the United States to the women living in the middle eastern region, navigating between the notions of freedom and Arab identity. She says her “work reaches beyond Islamic culture to invoke the Western fascination, as expressed in painting, with the odalisque, the veil, and, of course, the harem”. 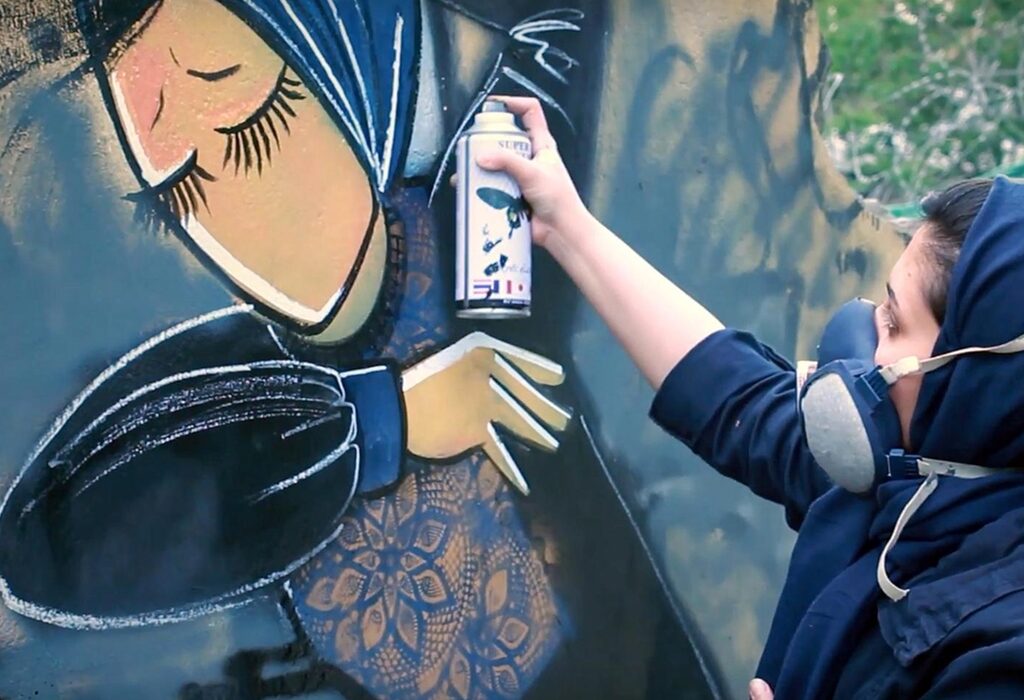 Shamsia is an Afghan graffiti artist, as well as a fine arts lecturer and the associate professor of Drawing and Anatomy Drawing at the Kabul University. She uses her art as an instrument to fight for women’s rights, especially in Afghanistan.

By using Kabul walls as her canvas, her goal is to introduce art to the Afghan people and to remind them of the tragedies faced by women in the country. “I want to highlight the matter in the society, with paintings reflecting women in Burqas everywhere. And I try to show them bigger than what they are in reality, and in modern forms, shaped in happiness, movement, maybe stronger. I try to make people look at them differently” she explains.

She presents these covered women as forceful figures, far from the Taliban stereotypes. “People think that women in burqas are powerless and uneducated, without ideas of their own. They think it is a limitation.” 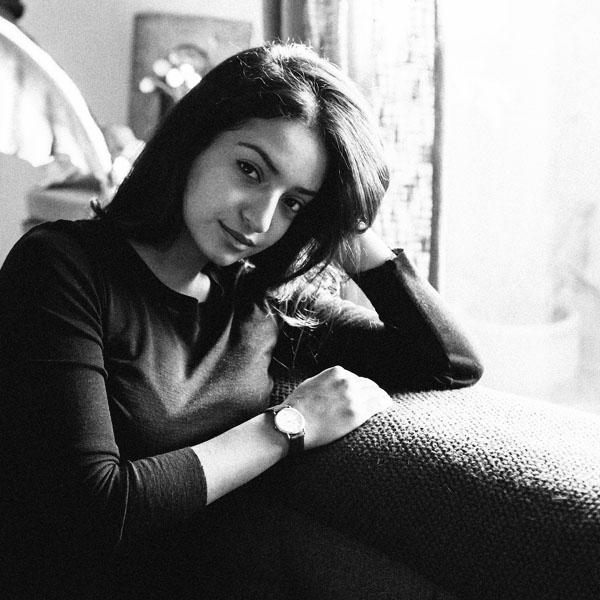 Yumna Al-Arashi is a self-taught documentary photographer. Born and raised in the United-States with Yemeni heritage, her work revolves around women, feminism, human rights and nature.

In her new series “Northern Yemen”, she explores the use of the hijab by Yemeni women. According to Yumna, “women who wear the hijab are freer than others”. She adds that “in Yemen, women are real ninjas under their black clothing. They’re strong, powerful, graceful and beautiful, the boss of their house, their family and their land”.

Yumna recognizes how Muslim women are often seen as powerless and with no proper identity simply because of their hijab. But she explains that the hijab is actually a tool of feminism. She says in Yemen, there’s a respect for women that we rarely see in the Western world. “Through this piece of clothing, they shield themselves from any judgement based on their appearance”. 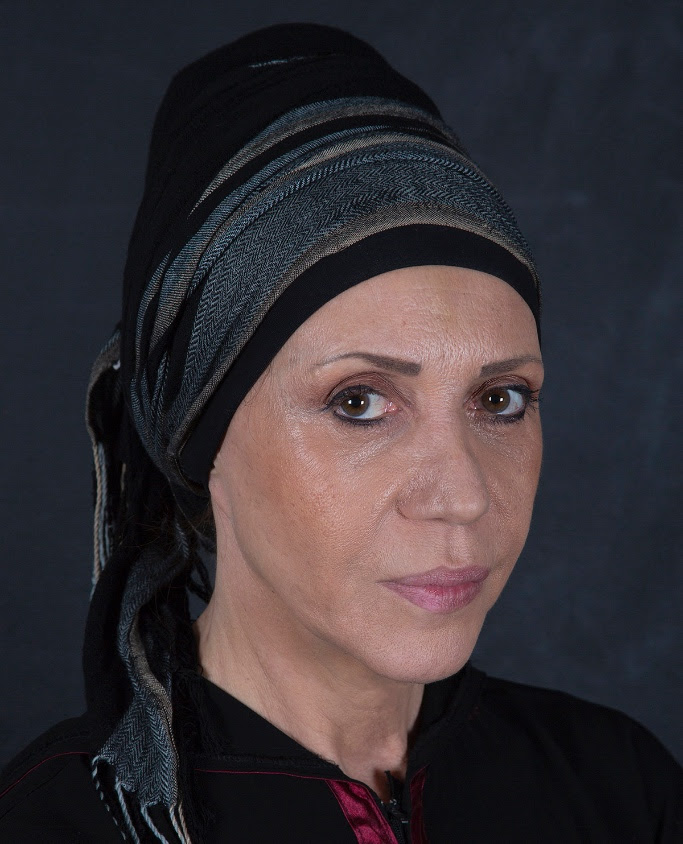 Maïmouna Guerresi is an Italian multimedia artist. Born in a Catholic family, she converted to Islam after an inspirational trip to Senegal. Her conversion inspired her into becoming an artist.

She works with themes that embody the relationship between society and women. As she says, “in my pictures, I represent the mystical character of African muslims. This mysticism inspires me with charismatic greatness”. Following her strong connection with sufism, her work refers to its symbols and terms.

You will find recurrent elements such as trees, the hijab and milk. To reach the emotion that she wants to pass, she plays with color, facial expression and lighting of the body. She explains that the body “is no longer a prisoner of the soul but becomes the space of the Divine”