A group of women you never mess with is Palestinian women. Israeli soldiers decided to test the waters once again by attempting to prevent these “Murabitat” — which translates, roughly, to “those who will protect [Islam/Islamic shrines]” — from entering the Al-Aqsa mosque, Islam’s third holiest site, and placing them on a 40-woman blacklist. While Al-Aqsa is internationally recognized as part of Palestine’s West Bank territory, Israel is currently illegally occupying the city. 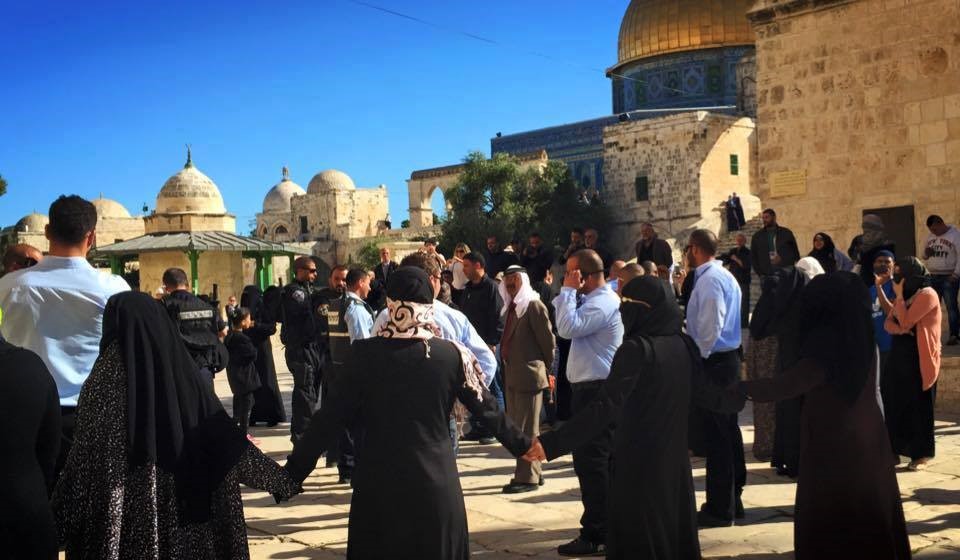 More than a hundred armed Israeli soldiers violently trespassed and fired stun grenades, tear gas canisters and rubber-coated steel bullets at the Palestinians. Hanady Halawani, a fierce sister who is a Quran teacher at Al-Aqsa, claims that she has been banned six times within the past two years, for a total of 10 months. She has been banned once again from praying and is not even allowed to teach her 7:30 AM Quran class at Al-Aqsa. She joins a large group of women who have held sit-ins over the past few weeks, trying to stop the settlers from destroying the sanctity of the mosque. The women have held signs reading, “It is my right to pray in al-Aqsa,” and, “You ask who we are? We are the women of Palestine. We are not terrorists.”

“The strong presence of women has prompted Israeli authorities to place the ban and distribute the blacklist. They are the primary defense line at Al-Aqsa and Israeli police are disturbed and intimidated by this,” Halawani said.

Their resilience has led to severe violence, such as sound bombs that can potentially lead to permanent hearing loss, severe headaches and loss of balance. Halawani herself has had her hands burned and witnessed a woman who was dragged by her hair for miles by an Israeli officer, screaming and begging for help. “The violence isn’t anything new — We have always been wives, daughters, sisters or mothers of prisoners or martyrs,” she said.

Criticism from around the world of Israeli’s invasion has social media buzzing and local religious leaders very upset. Local Archbishop Atallah Hanna, of the Greek Orthodox Church in Palestine and Jerusalem, strongly denounced the Israeli military and Israeli extremists for their attacks and invasion of Al-Aqsa Mosque.

The beauty of the Palestinian resistance movement is that women and men have always stood together, side by side, ready to protect and fight for what is theirs.  As the men sit with rocks ready to protect their land, women also sit on the front-lines not allowing anyone through.

Here’s to you, the women of Palestine, for holding it down. We admire and aspire to be like you — Your bravery moves mountains.

RBG and the Road She Paved for Women Everywhere: I, Too, Dissent

Meet the Muslim Woman Behind #IStandWithAhmed