Tween Magazine ‘Justice’ Just Featured an Ad with a Hijabi

On Feb. 16, the shrine of the esteemed Sufi Saint, Lal Shahbaz Qalandar, was bombed. Islamic State took responsibility for the at minimum 88 lives that were lost that day, and over 250 that were injured.

The shrine, located in Sehwan, Pakistan, is a place of worship for many different faiths including, Shias, Sunnis, Hindu, Christian, Sikh. The blast happened on the busiest day of the week, Thursday, were worshipers participate and watch, Dhamaal– a Sufi ritual.

Syed Mohammad Usman Marwandi was born in present day Afghanistan in 1177. From a young age, he showed a lot of interest in Islam and it’s teachings. He learnt the Holy Quran by age 7. At age 20, he chose the ‘Qalandar’ path of Sufism which is dressing in beggar-like clothing and not having a proper home. As he travelled he found his way to Sehwan, along the way he brought guidance to thousands of people. He was given the name Lal Shahbaz Qalandar, “He was ‘Lal’ (red) because of his red attire, ‘Shahbaz’ due to his noble and divine spirit that soared like a falcon higher and higher in the boundless heavens and ‘Qalandar’ since he belonged to Qalandria order of Sufism and was saintly, exalted and intoxicated with love for eternal being of God.”

A man who preached peace, a religion that devotes itself to spirituality and oneness with God, worshipers taking a moment on a Thursday to visit a shrine to engage in spirituality and yet killed by a group who claims they are the same religion. Look at the two groups and tell me which one sounds like a religion and which one like a hate group. 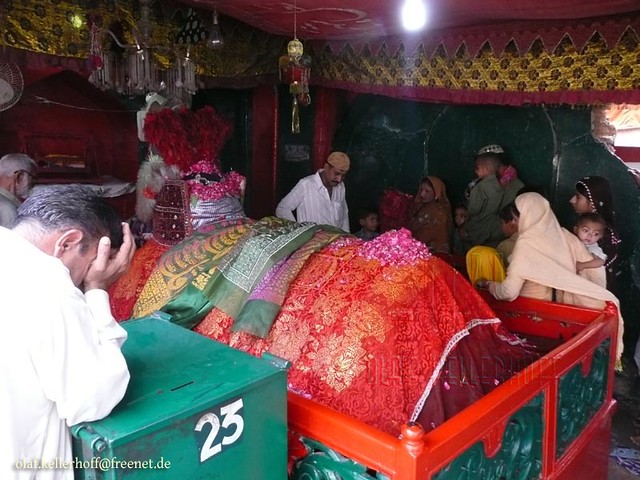 Hearing about this tragic attack put me through a whirlwind of frustrations.

I know it is over said, but we have to keep shouting it out. Where is the coverage when Muslim lives are killed by ISIS? The Lal Shahbaz Qalandar shrine was the one of six attacks in Pakistan just this week. Over 100 people were killed all throughout Pakistan due to terrorism. And if you are thinking, well sounds like a Muslim problem or sounds like a Pakistan problem, you are wrong.

Western media and government needs to step up the way they are covering the lives of Muslims in both the West and in the Middle East/South Asia. Think about the double standards when there is a Muslim attacker versus a Muslim victim, or when there is a White attacker, notice the loaded words and adjectives used.

People are influenced by the way they are presented information. Without the media telling it’s audience that Muslims are being killed by ISIS, yet showing continuous footage of Western lives being killed by ISIS, you, the audience will not believe that Muslims are on more average killed by ISIS than Non-Muslims. You, the audience will see “Islamic State” and equate that with the average Muslims. So this is not a “Muslim on Muslim” attack or a Muslim problem, this is a global problem. This impacts the way you an average non-Muslim sees an average Muslim.

“Moderate Muslims” — Time to speak out

I can’t ignore that this attack was done to a Muslim minority. Like majority of attacks done in Pakistan. Terrorist groups in Pakistan, the Islamic State in the Middle East, refer to minorities such as Sufis, Shia, Ahmadis, and other groups as Kafirs, infidel. Using misteachings about the individual sects, groups like these fuel hate and anger and cause disunity and disruption within a religion. These terrorists are extreme cases, but many people you come across may have been taught similar things from their communities or families in regards to Muslim minorities.

So if you are one of the ones that call Muslim minorities kafir then check your bias, educate yourself, it starts within ourselves.

6 Disastrous Takeaways From ACB’s Sham of a Confirmation Hearing

Men Aren’t the Only Ones Who Watch Pornography

Tween Magazine ‘Justice’ Just Featured an Ad with a Hijabi