Or so I’ve been told by colleagues who defend the mass surveillance of Americans revealed by Edward Snowden. In a sense, there is a bit of truth in that statement. I’m not a criminal. I’m not harboring anyone deemed threatening to the United States. But, I live in fear, because I do have something to hide: my religious identity.

I’ve hid my religious identity for about twelve years. Although I was only eight-years-old when 9/11 happened, I became no longer naive of the way others perceived me. For the sake of my security and in an attempt to free myself from discrimination, my family changed my name and drilled into my head that I must not identify myself publicly as a Muslim. I was in third grade then and the recess playground became a battleground. In the school hallways, my best friend called me a terrorist.

And still now, after hate crimes on the rise and Muslim students shot execution-style over a parking dispute, I am told by concerned family members to repress everything public about my religious identity. I should not veil my hair. I must do “American” things. I shouldn’t speak out against oppression and for justice for my community. I must protect America and its government at all costs. I should not express my love for my faith. I must hide and repress my identity.

Since the aftermaths of September 11th, U.S. leaders like former President George W. Bush have made efforts to differentiate Muslims who practice the Islamic faith and those who commit terrorism in the name of Islam. President Obama echoes these same efforts, and even under his administration, White House officials refrain from explicitly saying terms such as “radical Islamists” or “Islamic extremism.”

However, it becomes a point where American-Muslims must speculate and be skeptical of the urge for lawmakers and government officials to constantly reassess they are not at a war against Islam. It’s a morbid phenomenon to have U.S. leaders proselytize that American efforts to fight terrorism are not designed to be anti-Muslim when surveillance programs, like those conducted by the NYPD, FBI and NSA, are deliberately and disproportionately targeted against American-Muslims solely for the basis of shared religious identity. 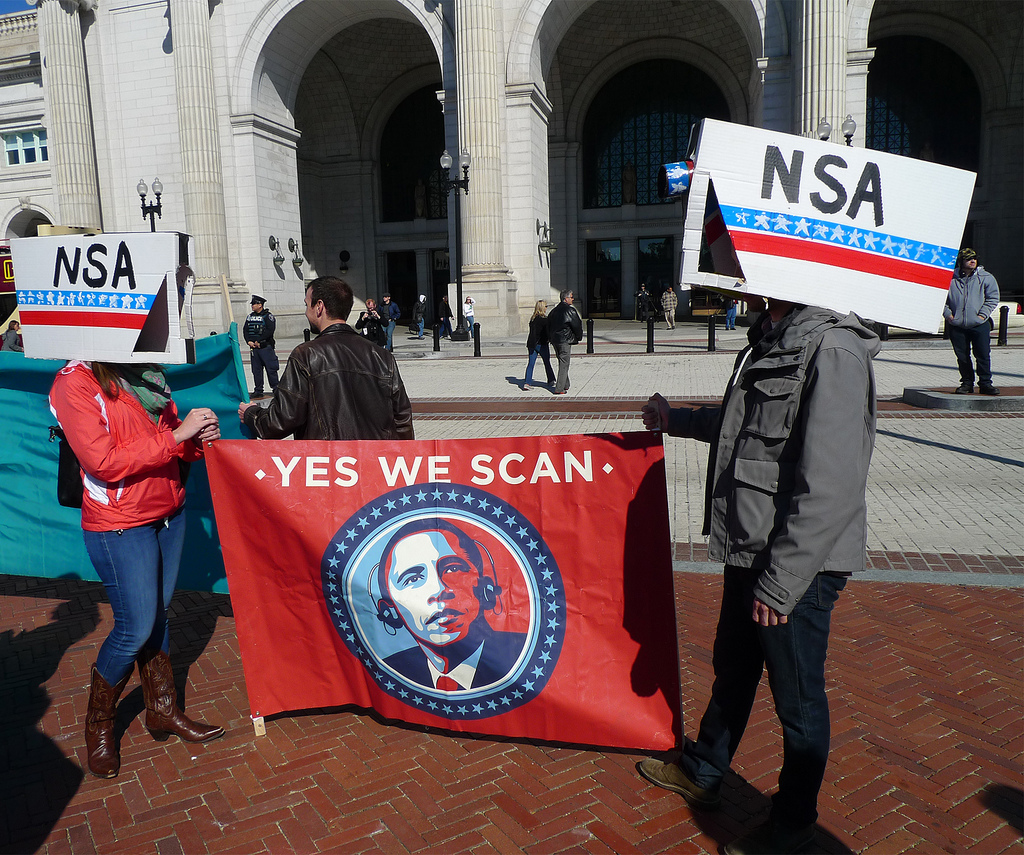 Protesters at a 2013 rally against mass surveillance. Photo by Susan Melkisethian.

As a Muslim woman journalist, the fear of surveillance has been something I have internalized for years. For those who are not immersed in my community, the fear instilled from the real-life experiences of friends’ family members seems irrational. Although other people can dismiss worries about NSA surveillance as paranoia and say that the surveillance protects Americans’ freedom, my fears are well-founded.

Surveillance has permeated the community so thoroughly that several government agencies coerce even the most law-abiding American-Muslims into becoming informants, thus making even the most noble and law-abiding neighbors, like Naveed Shinwari, vulnerable to dangerous deals with their government. Shinwari, who has lived in the US since he was 14 and has never been charged with any crime, was added to the no-fly list after he refused to become an informant for the FBI. He’s one of four people suing the FBI for using the no-fly list to to intimidate and retaliate against Americans Muslims.

For women in my communities, it used to be that our homes were our safe havens. However, that is diminished when FBI agents posing as smoke detector installers placed hidden cameras in our homes—like they did in the small town where my parents used to operate a business (the details of which are told in upcoming documentary The Fear of Being Watched). It’s diminished when NSA agents can hack into our cellphones and record our conversations. When we’re under surveillance in our own homes, we are robbed of the very last place where we feel safe and secure—and that is an act of violence. 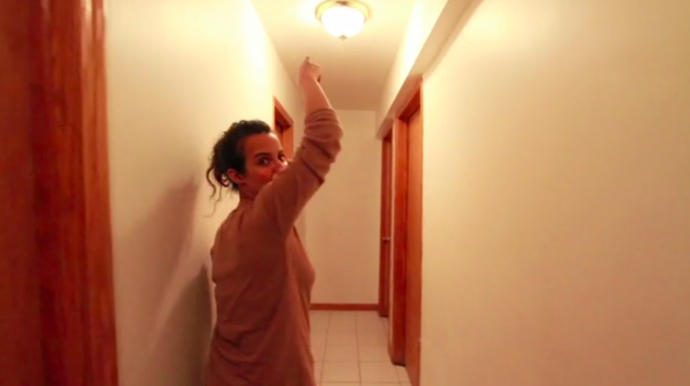 In documentary The Feeling of Being Watched, a young Muslim woman in Justice, Illinois points to a fake smoke detector installed in her ceiling by people who pretended to be from the local government.

American-Muslim women who attempt to fight suppression and the right to their thoughts and bodies on every front are the ones who face the most victimization. When there is no space in our lives where they can safely communicate frustrations on the racism, sexism, violence, and emotions of their daily lives, they are led to internalize the surveillance and grow quieter with no avenue through which to communicate. When Big Brother takes the shape of not just the state but the community institutions we are a part of, our households, and our own bodies, then our fight against these oppressions becomes close to impossible. It is our bodies that are under control by U.S. government. It is our bodies under careful scrutiny–every action, every word, every whisper—can be used against us. It is our bodies that can be whisked away for saying the wrong thing at the wrong time–for using sarcasm or humor to keep ourselves laughing from crying–even in the last place we feel safe, our homes. It is our bodies laughed at, sexualized and shared among NSA agents.

Surveillance on American-Muslim women goes past the static, rigid, definitive effects of self-regulation. It strips us of the intimate human capacity to draw on our emotions outside of ourselves. We build cities and civilizations of love, defeat, and resistance within us, and it is an oppression to not find a space where we feel welcomed, accepted, and in solidarity. We should not have to reaffirm our bodies to a society that silences our narrative, a community that sees our existence within a patriarchal hierarchy, and the confines of our own physical private space itself.

For American-Muslim women, the forceful, involuntary intrusion of surveillance in our lives is a constant reminder that we do not own our bodies. We are reminded of our lack of control when our bodies are mocked and sexualized at the hands of NSA agents who share pictures that were intended to only be used for “security purposes.”  But we’re not celebrities, so you don’t care.

These days, when members of the American-Muslim community need solidarity more than ever, there isn’t even a cry of support from within. Not even a whimper. State-sponsored surveillance penetrates us to the point where American-Muslims live in a constant state of paranoia and self-censorship. The American-Muslim lives in a virtual internment camp where our bodies are not our own and our thoughts and voices are controlled by the fear of our National Security Agency.

We are still afraid to speak up against counterterrorism policies enacted by the U.S. government, because any form of critical political speech from us can be misconstrued as a sign of radicalism. Mosques no longer have—and never had—the same libertiesas churches or other houses of worship. The donations we provide to mosques will be accused as a front for funding terrorism. Our politicized sermons will be accused of being terrorist plots. Virginia’s al-Hijrah mosque will always be viewed as a breeding ground for terrorism while Evangelical and Baptist churches tied to violence against those who do not share their views continue to worship freely without state-sponsored surveillance. These suspicion that Muslim Americans have any link to violence often results in detention and widespread surveillance of our family members and communities.

Our fears of being persecuted are not paranoia—theyre well founded. The fear comes from hearing the story of a friend’s brother who was arrested by Saudi authorities in cooperation with the U.S. government while taking exams in the Islamic University of Medina in Saudi Arabia only to be detained without due process–starved, beaten and tortured to the point of making a false confession. The fear comes from a friend’s father wrongfully indicted for terrorism charges under the Patriot Act for his political activism for Palestinian causes, forced into a plea bargain, and made to spend years living as a political prisoner only to be deported and separated from his family. The fear comes when the FBI and SWAT teams raided Laila Yaghi’s home in Raleigh, North Carolina to arrest her teenage son Jimmy on the charges of participating in a conspiracy to commit “violent jihad” —with no evidence, but the fact that Jimmy traveled to Palestine and Jordan visit family members. The very idea that our bodies can be whisked away without my control and with no accountability scares the living hell out of me.

For the American-Muslim women who are dead-set on preventing their bodies from becoming controlled by the surveillance state—what can we do? Nothing.

We can make attempts, like I did, to diminish our religious identities for a small chance of escaping ostracism and to manufacture a false sense of assuredness that we’re no longer targets of the U.S. government. We can change our names. We can unveil our hair. We can do “American” things. We can “hide” and repress our faith. But where do we turn when we’ve become our own last prison?

Hadiya Abdelrahman contributed to this article.

This article is published in collaboration with Bitch Media, a non-profit organization that provides and encourages an engaged, thoughtful feminist response to mainstream media and popular culture.