Who Really Were the People at the White Supremacist Rally?

Cities around the country (including New Orleans, La., Orlando, Fla., Charlottesville, Va., and St. Louis, Mo.) have continued taking action in removing confederate monuments from public spaces. Although New Orleans, La., has been the most prominent city to remove memorials of Confederate soldiers, Charlottesville remains as a hot spot for white nationalists to protest against removing, what they claim, Confederate history and heritage.

Thousands of individuals made their way into the streets of Charlottesville with tiki torches late Friday night and early Saturday morning to protest both for and against this rally.

Albeit being known for its progressive views, college town Charlottesville is encountering its third white supremacist rally in under four months (the first and second assembly being in May and July, respectively). In an attempt to explain why this town has been a rally ground, Jason Kessler, both a Charlottesville resident and an organizer of the recent “Unite the Right” rally, states,

“This entire community is a very far left community that has absorbed these cultural Marxist principles advocated in college towns across the country, about blaming white people for everything,”

and points blame on, what he claims,

“…the anti-white hatred that’s coming out of the city.”

“We want to change the narrative by telling the true story of race through public spaces. That has made us a target for groups that hate that change and want to stay in the past, but we will not be intimidated.”

Responding to their own concerns, white nationalists organized a “Unite the Right” rally to be held today, Aug. 12, 2017, in an effort to join forces with other alt-right groups (i.e. klansmen, neo-nazis, etc.) against anyone threatening to remove their history. Unite the white protesters attended this rally with homemade shields and various different sorts of defensive technology. 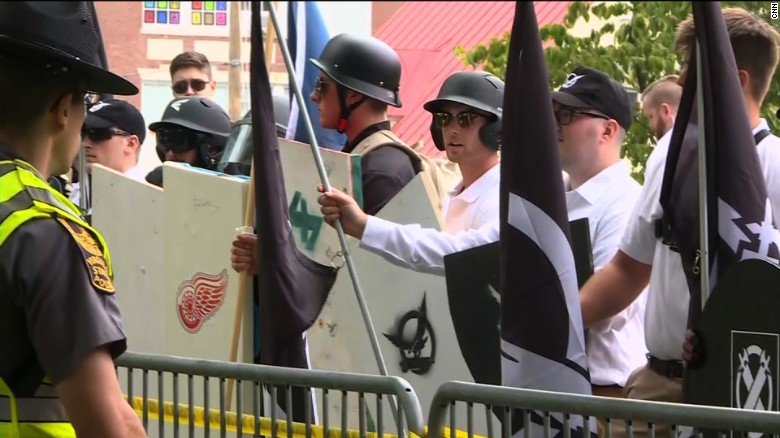 According to Al Jazeera, this event could become of the largest white supremacist events in recent United States history.

Thousands of individuals made their way into the streets of Charlottesville with tiki torches late Friday night and early Saturday morning to protest both for and against this rally. The alt-right marchers initiated violence and chanted “white lives matter,” “fuck you faggots,” and “you will not replace us” in an effort to intimidate the surrounding communities.

After hours of allowing the rally to continue, Virginia governor issued a state of emergency for two city jurisdictions. Police forces worked to dismantle and disperse the rally after officials declared this gathering an “unlawful assembly.” An unspecified number of arrests have been made in relation to this organized event.

Confirmed reports of a three-vehicle crash injuring 19 pedestrians and killing one individual at Water and 4th Streets in Downtown Charlottesville have been made earlier today.

Viewer discretion is advised for the following images.

Video proof of the incident show a silver Dodge Charger with tinted windows plowing into a group of counter-protestors and then reversing to flee the scene. The driver of the vehicle remains unidentified.

President Trump finally broke hours of silence from the White House by tweeting the following:

Several members of his team followed suit by tweeting:

Should You Remove Your Hijab for Job Opportunities?

Even so, it is necessary for us to scrutinize Trump’s agenda beyond his tweets when individuals such as David Duke, a former KKK leader, attends such rallies and states that the hate-filled assembly, “fulfills the promises of Donald Trump.” This weekend’s rally is not the first of it’s kind. Rather, it is one example of the increased rise of hate groups since Donald Trump’s presidential candidacy.

UPDATE: The victim has been identified as 32-year-old Heather Heyer, a paralegal from Greene County whose last Facebook cover photo said, “If you’re not outraged, you’re not paying attention.”

The 20-year-old driver of the vehicle has also been identified as a member of Vanguard America: James Fields Jr., from Maumee, Ohio. According to the Daily News, “He fled by backing away from the scene, but was arrested a few blocks away.”

On Saturday, the car that slammed into a crowd of counter-protesters, including members of Black Lives Matter, ran into about 20 people at 40 miles per hour. According to officials, about 15 other people were injured in brawls that broke out surrounding the roadway rampage.

Two Virginia state troopers were also killed in a helicopter crash while keeping a lookout above the rally. Although there are few details surrounding their death, the victims have been identified as Lt. H. Jay Cullen and Trooper-Pilot Berke M.M. Bates.

Muslim Girl will continue to update this article as more information is released.

A Group of Transgender Pakistani Women Were Sexually Assaulted at Gunpoint

Check Out How Our #MGArmy Celebrated Eid Al-Adha 2020

10 of Our Favorite #BlackOutEid Looks

This Muslim Indian Girl Is a Martial Arts Wushu Warrior

Who Really Were the People at the White Supremacist Rally?