It’s Time We Embraced Our #BlackMuslimGirlMagic

It turns out that Donald Trump isn’t the generous philanthropist he says he is.  (Surprise, surprise.)
The Washington Post’s David A. Farhenthold is one of many journalists who have investigated Trump’s charitable track record and found that, well, there isn’t much to investigate.
The 70 year old business mogul with a net worth of about $4.5 billion USD has his name attached to numerous moneymaking enterprises. Think Trump University, his reality TV show “The Apprentice,” the Trump Organization, Trump Vodka, Trump towers, Trump golf courses, books authored by Trump, and so on.
Over the years, he has promised to donate millions from a number of these entities but has rarely followed through with these pledges.
Farhenthold found that in the last 15 years, Trump promised to donate over $8.5 million to charity but has only donated about a third of that.

Farhenthold found that in the last 15 years, Trump promised to donate over $8.5 million to charity but has only donated about a third of that.

This May, he was scrutinized by the media for not keeping his promise of donating to a veterans group. Under media pressure, Trump finally donated $1 million to Marine Corps-Law Enforcement Foundation, a nonprofit helping veterans’ families.

Apart from the aforementioned donation, Trump has made only one other donation in the last 7 years.

Apart from the aforementioned donation, Trump has made only one other donation in the last 7 years. In 2009, he gifted somewhere between $5000 to $9,999 to the Police Athletic League of New York City.
So in total, Trump has only donated about $3.8 million since 2001.

Even though Trump and his staff claim to have privately and regularly given away millions more in charity, they won’t release his tax returns which could confirm their claims and put a halt to the controversy.
The Post’s Farhenthold reviewed 188 charities who might have received these gifts from Trump, but found only 11 that confirmed having received the kind of personal donations that Trump claims he makes.
Considering Trump’s inability to honour his philanthropic promises and his reluctancy to provide official records to the public about the donations he makes, it is safe to say that Donald Trump is not the “ardent philanthropist” he claims he is. 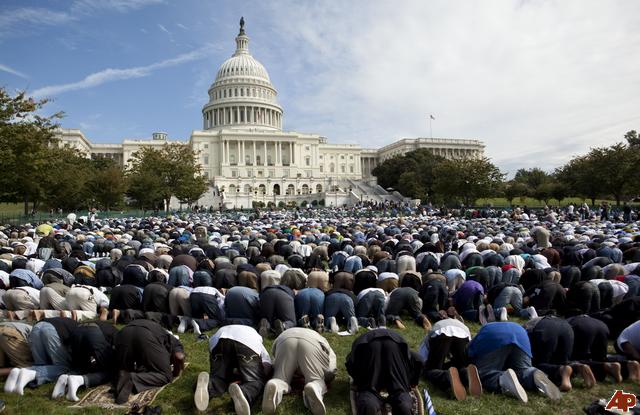 Muslims, on the other hand, are obliged by their religion to donate 2.5% of their annual wealth to charity through a system known as “zakat”.
Zakat, being one of the five main pillars of Islam, ensures that the most vulnerable in society receive financial support from other members of their society.
A recent survey in the UK found that Muslims gave more to charity than any other religious group.

A recent survey in the UK found that Muslims gave more to charity than any other religious group.

An American Muslim charity, Helping Hand for Relief and Development (HHRD), was named one of the top 10 charities in the United States in 2013.
A Pew Research Centre report found that 77% of Muslims donate to charity.

A Pew Research Centre report found that 77% of Muslims donate to charity.

Most Muslims increase the amount of charity they give during the month of Ramadan to reap more rewards and to give back to their communities as much as they can. Each member of a Muslim household is also required to donate a certain amount known as “Fitrana” before the day of Eid-ul-Fitr, the Muslim holiday that marks the end of Ramadan.
So we’re not as bad as Trump makes us seem, huh?

A House Fire in Denver Killed a Muslim Family of Five

What Have We Learned Since Nelson Mandela’s Arrest 58 Years Ago?

Legend and Rebellion: The Subversive Films of Abbas Kiarostami

It’s Time We Embraced Our #BlackMuslimGirlMagic